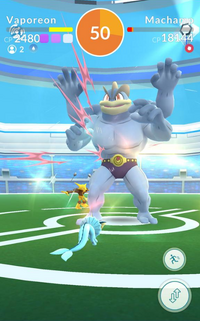 Raid Battles, or simply Raids, are a way to battle Pokémon with higher-than-normal CP. They appear randomly at Gyms. A "second round" is set to take place in 2018's Pokémon GO Fest which will include the next legendries from the next Generation.

Trainers will need a Raid Pass in order to join. Trainers can receive one free Raid Pass daily by spinning a Gym PokéStop. Premium Raid Passes can be purchased from the shop for 100 PokéCoins.

Upon joining a Raid, up to 20 trainers can work together to defeat the Raid Boss. If the Raid Boss is defeated within the 3-minute time limit, the trainers who participated will be able to get a chance to catch the Raid Boss.